In addition to lobsters, I've been trying to learn how to cook a few other things while I'm out here.
Today I tried oysters!

The species we tried were Pacific oysters (Crassostrea gigas) - and they were pretty huge! I used a shucking knife to open them up down the side (only stabbing myself a few times) and to cut through the muscle attaching the top of the oyster to the shell. 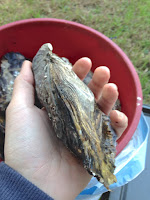 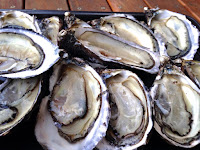 We decided to make Oysters Kilpatrick - mainly because I didn't feel completely ready to try nude, uncooked oysters just yet (maybe next time?). 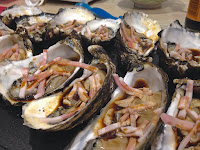 So after shucking the oysters, and also cutting the muscle connecting the oyster to the other side of the shell, we tipped out the excess juice and placed some thin slices of uncooked bacon on top of the raw oysters. Then we added a little Worcester sauce onto each of them (ok, it was rather a lot of Worcester sauce - I LOVE Lea & Perrins.. on EVERYTHING). Then we chucked them under the grill for a bit until the bacon bits were all crispy.

I tried them... and they were nice! I feel slightly more confident about trying them raw now (I think). At least now I know the taste of the beasties I'm doing experiments on!