So my experiment has finished & we have had a look at the results. Deciphering the stats results could take a little time - but we can deduce some things from the initial graphs of the results.

The oyster larvae exposed to the harmful algae seemed to stop eating - and the higher the concentration they were exposed to, the longer they stopped eating (with the most severe exposures still not eating after 6 days!). Now we assume they have some reserves from the egg - so don't need to eat immediately. Perhaps they can detect that something bad is in the water and so they clam up (so to speak) to prevent themselves from being negatively affected? 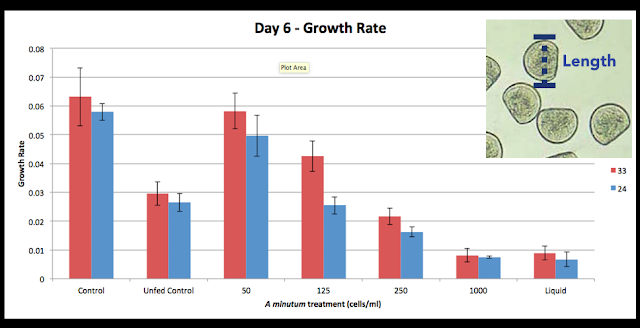 I also looked at oyster larvae length - and found that the larvae exposed to more harmful algae didn't grow as much as the controls that weren't exposed (which makes sense because they weren't eating). However the unfed control larvae (second from the left) still ended up larger than the larvae exposed to the highest concentrations of harmful algae (on the right). This could indicate that they are having to use energy in some way - perhaps to repair damage being caused to them by the algae.. But more experiments need to be done to confirm this. We are sending some of the algae and algae water off to analyse the components and toxins present in order to help to answer some of these questions. 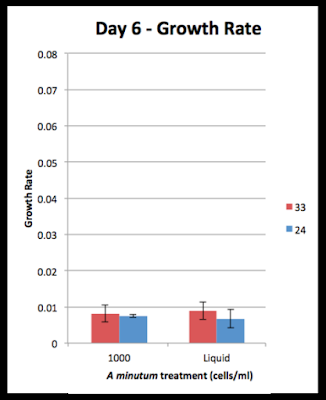 This graph shows the growth rate of the larvae exposed to 1000cells/ml of the harmful algae (left), and the growth rate of the larvae exposed to the water from 1000cells/ml (but no actual algae cells - just whatever they gave off into the water). And it is really interesting because it shows no difference between these 2 treatments - suggesting that whatever is affecting the oyster larvae is in what is being emitted by the harmful algae (not the algal cells themselves). This could mean that water used in oyster hatcheries needs to be tested and treated differently, as at the moment it is just run through a very tiny filter - but this won't get rid of any water soluble toxins that could be in the water. But again, more work needs to be done before any real conclusions can be reached.

Exciting stuff - and the Fisheries Institute is going to keep me up to date with any further findings on the subject, including the toxin test results, which should be very interesting to see.

I've been spending the last couple of days sorting out all of the data I collected so that it can be understood by a person who isn't me, and preparing things for my return home - I can't believe it's been 3 months since I first arrived here!
Posted by Charlie W at 08:49